Alx, Do You Know Where Your Pants Are?

Alx has a continual stream of stories about work, mostly funny, sometimes sad, just like any other person who works in an office setting. But there’s the thing. He doesn’t work in any office. Nor does any of his co-workers. He’s been employed with Automattic about a year now and I have heard about these people on a daily basis but can count the number of co-workers that I’ve actually met face-to-face on a single hand. I can tell by the way that he speaks of them that they have very real and healthy relationships.

However as a Spousamattician, a play off of Automattician (what Automattic employees are dubbed; kids are Spawnamatticians), the only gauge that I have that my husband is actually working for a real place and isn’t talking to imaginary people is the paycheck that keeps showing up. Oh, and the absolutely fabulous healthcare plan. Automattic truly takes care of their own, but I digress. The point is that it’s surreal for someone who gets hired let along for their significant others. I mean really. My husband disappears for hours on end into his various devices (provided by the company I might add) to a virtual world that I have no part of and he also jets off to random and sometimes quite exotic places in the world pretty regularly to “work.”

I wanted (needed) to learn more about the company that Alx loves almost as much as his wife and kids. I tried asking him but that only made it even more surreal. He talked about P2’s, tickets, IRC, blah, blah, blah. “Um, well, you know, it’s like, how we communicate,” is the explanation that I received when I would ask things like, “what’s a P2?” in the midst of his gushing about his totally awesome job. He really tried to explain it but it was just beyond me. So as you would guess, I was highly interested when he mentioned that a book came out about working at Automattic. 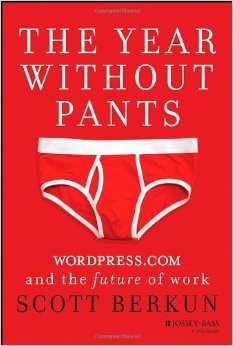 Hence this book review of  The Year Without Pants: WordPress.com and the future of work by Scott Berkun aka The Deciphering of Where My Husband Has Been for the Past Year.

Finally, an explanation that I can understand! After reading it, I get it. Now I understand why it was so hard for Alx to explain it to me. He’d have to write me a book to unravel the intricacies enough for me to wrap my head around it. Well luckily, Berkun did it for him. It was great for me to take-in the very detailed but easy way that Berkun relayed the history, inner-workings, relationships and culture of Automattic. It’s not just a job. It’s a passion. Automatticians LOVE what they do and who they work for. And more impressively, Automattic LOVES them back.

How can a company be so lucky and awesome? Berkun traces the path of culture well and as you read further into the book, you find yourself saying, “Of course. How could it be any other way?” Not only does he map out how organically Automattic became what it is today but compares it with how most companies are run which makes it even more interesting. Through Berkun’s vast experience in the inner-workings of business management and leadership, you can see how different and new the structure was and still is.

Berkun has a down-to-earth voice that I can relate to and gives explanations revealing his knowledge without sounding pompous. He gives life to the various figures within Automattic such as it’s founder, Matt Mullenweg. The way my husband looked like he was going to shit bricks when he found out he had a Skype chat (cause that’s how they roll) with Mullenweg at the end of his trial, a grueling hiring process, you’d think he was taking a call from a rock star. Well after Berkun’s account of how Mullenweg went about creating Automattic and WordPress.com, he’s damn near a rock star; however, Berkun doesn’t put him on a pedestal. He simply recounts Mullenweg’s journey and keeps him a very real, accessible person which, according to my husband, is very true.

A quick and easy read full of facts, business strategy, drinking and the mysterious ways of Automattic, Berkun did Automatticians around the world a solid. In about 240 pages, he deciphered and put in plain language what my husband could not. So hear me Automatticians, if you have a Spousamattician that just doesn’t “get it” then The Year Without Pants might be the way to go. I’m not going to say that the sting has been removed (I’m still bitter about the last time Alx went on a “work” trip and went zip-lining through the Redwood Forest) but I’m a little more willing to accept that this is the culture of Automattic, the future of work.

*By the way, just a bit of a breakdown: WordPress is an open-source project, WordPress.com is a product of Automattic, Automattic is an internet start-up founded by Matt Mullenweg. See, told you it’s confusing.

What are you reading?