Beneath the Surface at Rutgers

I attended a really interesting lecture and exhibition this past week: Beneath the Surface: Poster Exhibition from Iran at Rutgers-Camden Center for the Arts. It’s a collection of Iranian posters curated by Nahid Tootoonchi, Townson University. AIGA has an excellent article about it.

Tootoonchi, Iranian herself, felt that her purpose in doing this exhibit was to open up an opportunity for Westerners to be exposed to Iranian design. In fact, each piece in the show is from her personal collection. She visited each of the artists in their studios and discussed their design with them. I found this to be really cool and very much appreciate her efforts.

During the talk, she gave a quick and dirty run-down on Farsi because typography is a major element within Iranian poster design. As a monolingual designer, this aspect of the presentation was especially interesting. The Farsi was beautiful. Hard edges are non-existent and each element flowed seamlessly into the next. 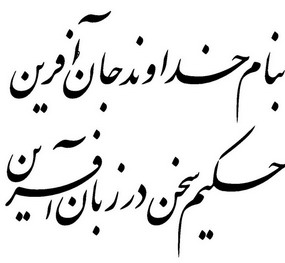 Many of the designers used English and Farsi simultaneously within the designs since the posters were often internationally displayed. Seeing the two juxtaposed side by side created an appealing tension between the hard, straight edges of English and rounded, graceful strokes of Farsi.

Another element that caught my eye was the lack of imagery. I’m not that familiar with Muslim but learned that the use of human imagery is frowned upon because it could be considered worship of a deity. If imagery was used, it was obscured in some way which gave way to an air of mystical mystery.

There were movie posters in the mix and it was odd but refreshing to see them done without pictures of people. It seemed that the boundaries of creativity were pushed due to this restriction and the intelligence of the viewer stimulated.

The styles spanned the spectrum from graffiti looking to folky. Whatever the style each piece was a learning experience in itself. It was like getting a little sneak peak into Iranian culture. Makes you wonder what tidbits people around the world get from our posters.

The exhibit is fantastic and I highly recommend you attend. Here are the designers that are highlighted: