Harry Potter and the Bibliophile Son

When Harry Potter and Sorcerer’s Stone was first released, I was working as a manager at Borders Bookstore. As the world was falling head over heals for the wizarding world of Harry Potter, I fully and utterly loathed J.K. Rowling (insert collective gasp here).

You see, it wasn’t because I didn’t appreciate her personal story as well as her talent as an author. My body ached because of her. I mean this in a very literal sense. Palette after palette after palette of Potter books had to be opened, carted, and stacked. The earlier books weren’t too bad but then she really got into it and the books got much thicker. My back was killing me. Not to mention the absolute headache of keeping the store open past midnight so that kids and adults alike could come buy the book—IN COSTUME. 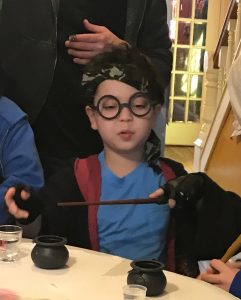 He’s now halfway into the Ender’s Series and I’m just finishing up book 3. I think he’s given up on me. I haven’t given up though. I will somehow, someday make it through the series but it looks like it’s going to be a long road. Such is the ebb and flow of responsibilities vs leisure.

My 5-year-old daughter, Emi, has begun to learn to read. Maybe I’ll take a hiatus and start up again when she’s ready to dive into the wizarding world of Harry Potter…