So this evening I experienced the Wii Fit Plus. When I say experienced, I mean that I was stupified by this beautifully designed machine. 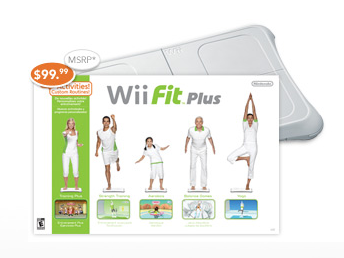 My lust for the Wii has been lingering since they first hit the market like everybody else but as with everything in my life, if it’s not vital then it’ll have to wait. It sucks but that’s the way of life with baby.

At any rate my sister-in-law, Katie, just purchased a Wii Fit Plus. I was there when she got it and the envy was boiling over. I had to resolve that I would just go play it at her house.

Well, ladies and gents, tonight I did for the first time. When Katie pulled it out from it’s little nook under the TV and handed me the remote I was dumb struck. It was gorgeous. The Balance Board was sleek, white, and compact. It wasn’t really much bigger than an average weight scale but oh my it was so, so much more. Even the ergonomic remote was beautiful AND it came with a trendy wrist strap. It was so pretty you’d think that Apple had made it.

The fresh white and green branding elements that are present in the packaging, on the website, and in the game added to the allure as well.

Not only was the system aesthetically pleasing, it was really fun to play. Let’s just say that I broke a sweat taking down Katie’s hula-hooping high score. I even got to design my own Mii. Your Mii is basically your Wii avatar. There’s so many choices in features that I was actually able to make it look very similar to me. The graphics are great. It sort of reminded me of Super Mario Brothers but much cuter and cooler. I guess that makes sense since Nintendo puts it out.

I’m so glad that I finally got to play a Wii and am even happier that it’s my sister-in-law’s so I can drop by and play all of the time. So thank you fabulously designed Wii, I bow down to thee with respect and admiration.